The art of making soap was not a new idea, and has been in the history of man for many years. In a documented text of Babylonian, there was a formula for soap making which reciped water, alkali and cassia oil. This is one of the earliest recorded history of soap production, which was around 2800BC. The Romans were known to make soap from goat tallow and ashes of the beech-tree. The soap was used by the Romans for household cleaning, bathing, washing and also used by the Roman fashionable ladies to color their hairs.

The ancient civilization methods of soap making were not industrialized and solely depend on animal fats and organic alkali (that is from ashes and other natural plant products such as resins) as a source of soap making ingredients. Most of the soaps that are produced are mainly for own consumtion. But by the end of 12th century, soap production began to be industrialized in Middle East: such as in Aleppo, Damascus, Fes and Nablus. And by 15th century, the semi-industrialized Professional manufacture of soap was concentrated in some cities of France. The soap making was not fully industrialized until during the 16yh century that plant-based extracted oils are used in Europe to manufacture soap, which became industrially revolutionalised by Andrew Pears around 1789 in London. 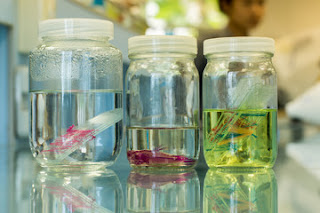 Botany of Rosemary Rosemary is an evergreen flowering plant which is native to the Mediterranean. Rosemary can also be found in some parts of Europe and Northern Africa.

Taxonomically, it is classified under the family Lamiaceae which includes Sage, Lavender and Basil. It belongs to the genus Rosmarinus, species officinalis. The name Rosemary is gotten from two Latin words ‘ros’ Dew and ‘marinus’ Sea which means Dew of the Sea.
Rosemary possesses oblong or square shape stem. Just like other members of the Lamiaceae family, Rosemary possesses opposite leaves, which are linear, needle shape and evergreen with smooth edges that generally tend to curl slightly under the blade. The flowers have two lips, upper and lower lips. The lower lip of the flower is larger and characterized with distinctive spots and lines. It has two stamens with pistil placed between them. The flower color may be shade of soft to medium blue or lavender-blue with some varieties having whitish or pinkish flower color…
Read more

5 amazing health benefits of lavender on the skin 5 AMAZING BENEFITS OF LAVENDER ON THE SKIN Sometimes, people tend to ignore the use of natural plant extracts such as essential oils, tea and other parts of the plants for treatment and skin care. They usually prefer to buy expensive synthetic products, and these synthetic skincare products are proved to be hazardous to the skin cells. They promote cancerous cells growth, skin ageing, and skin cells death. Before I dive into the benefits of lavender let me briefly talk about the botany and biochemistry of this plant.

LAVENDER
Lavender is a flowering plant native to southwestern Asia, Africa and Europe. Taxonomically, lavender is classified under the same family with rosemary and sage. The lavender belongs to the genus Lavendula, family lamiaceae. It is characterized with a toothed pinnate or just pinnate leaves but sometimes the leaves can be multiple pinnate and dissected, which in most species covered in fine hairs or indumentum.…
Read more